Tuberculosis (TB) is a major health issue and public health threat in Canada with approximately 1600 cases of active TB every year,1 and infectious disease specialists are worried that number will increase.

“TB anywhere is TB everywhere”, says Dr. Jan Hajek, an infectious disease and TB specialist with UBC’s Division of Infectious Diseases. “It is a disease that knows no borders, and because it can spread to others through the air, it is in all our interests to contribute to TB control efforts”.

Worldwide in 2011, 1.4 million people died from TB and 8.7 million new cases of the disease were reported.2

The TB epidemic is now at a tipping point. After decades of increasing TB rates, the number of cases has started to slowly decrease. Public health efforts have paid off, great progress has been made. However, the emergence of drug resistant strains of TB threatens all this progress.

Multi-Drug Resistant TB (MDR-TB) are strains of TB able to survive treatment by the two most powerful antibiotics currently used to kill TB; isoniazid and rifampicin.3 The remaining available drugs are much less effective, more toxic, and more expensive. The World Health Organization estimates that there were 630,000 cases of MDR-TB in 2011,4 and resistance is growing. Extensively drug resistant TB (XDR-TB) has emerged which is resistant to isoniazid and rifampin and two of the most effective secondary “back-up” antibiotics normally used to treat MDR-TB.3

“The growth of MDR-TB and the appearance of XDR-TB are major threats to global health which require vigorous and creative solutions”, says Dr. Neil Reiner, a distinguished researcher in the Division of Infectious Diseases and Director of the Immunity and Infection Research Centre (IIRC) at the Vancouver Coastal Health Research Institute.

The Division of Infectious Diseases, based out of Vancouver General Hospital, is home to physicians who are diagnosing and treating TB patients in Vancouver (~100 cases in 2012), and world renowned TB researchers who are focused on finding new drugs to combat TB.

Current research programs within the Division and IIRC are developing a new vaccine for TB in addition to three completely new classes of drugs that will kill TB while potentially negating the ability of the pathogen to develop resistance.5

“We are doing cutting edge research”, says Dr. Reiner. “This, in combination with state-of-the-art clinical care and public health programs, is urgently required to confront what threatens to become a major global health calamity”. 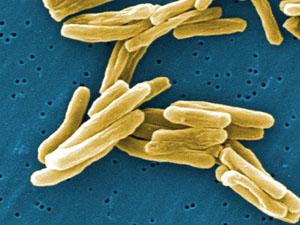 The Av-Gay Lab studies the molecules that tuberculosis bacteria secret to disrupt immune cells and allow the bacteria to survive in the body.  One of the molecules that the lab has discovered, protein tyrosine phosphatase, prevents macrophages (see Key Facts section) from killing TB bacteria.  The lab is working to develop drugs that target this signalling pathway.

The Reiner Lab studies the functioning of macrophages in response to infection, and like the Av-Gay lab, studies the chemical signals between macrophages (see Key Facts section) and TB bacteria.
The Reiner Lab has also developed a new technology that targets essential proteins found in pathogens that keep the cells alive.  Developing drugs against these essential pathogen proteins limits the ability of the pathogen to develop resistance, since even small mutations that could confer resistance are just as likely to disrupt the protein and kill the pathogen.

The Miller Lab is developing nitric oxide into a therapeutic to treat TB.  Nitric oxide is naturally produced by immune cells in the body to kill pathogens and is effective against a wide range of bacteria, viruses, parasites, and fungi.